Last week, I attended a workshop on Philosophy and Neuroscience at the Technical University of Eindhoven. Interesting lectures, friendly people and even including a delicious dinner – the good life of the academic! Most of all, it gave me a better understanding of how scholars position themselves and their field in the relationship between philosophy and neuroscience.

Key-note Guy Kahane talked about the famous trolley-problem, the kind of experiments neuroethicists keep writing about (which in itself is worth an SSK-study). He scrutinized the concepts of utilitarianism used by neuroscientists such as Greene et al. Kahane showed that these scholars use a quite narrow idea of this ethical theory, not including empathy or altruism. As a result, they can’t say anything about the nature of utilitarianism, as they are actually studying egoists. You could also argue that utilitarians don’t think harder or are more rational, but are rather less morally sensitive regarding anti-social behavior. Utilitarianism as a disposition, unfortunately not yet included in the upcoming DSM V. But it makes you wonder: was Bentham suffering from Asperger’s?

Kahane did precisely what many philosophers do 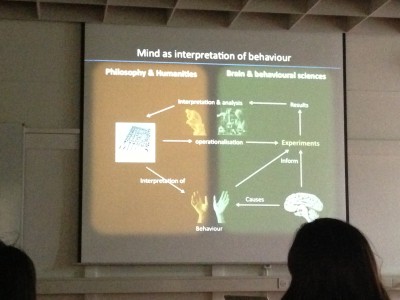 with neuroscience: problematize their concepts used and provide them with more nuanced ones – the traditional task of the philosopher, which is very needed in the field of the neurosciences (which can be regarded conceptually immature). But this division of labor is precisely what Marc Slors (Radboud University Nijmegen) aims to overcome. As all mental states are mediated with behavior (and there still exists a gap between neurons and mental states), mind should not be seen as correlate of the brain, but rather as a cultural interpretation of behavior. This would imply, as he argued, a more balanced division of labor between humanities and neurosciences: they can both be part of a kind of neurohermeneutical circle in which they would benefit more from each other (see picture). Sympathetic and wishful thinking at the same time, should read more of this.

What connects philosophers and neuroscientists is their fascination for the question: How to understand the human mind and behavior? They of course differ in their way of addressing it: by unraveling concepts or by measuring oxygen in blood flows. What struck me most during the workshop, is how often discussions (implictly) turn to the questions of what good science – good philosophy and/or good neuroscience – is and should be. Philosophers question the conceptual and methodological limitations of neuroscience, neuroscience research in turn urges some to reconsider the purpose and workings of their own field. A fate of interdisciplinarity, or typical for philosophy/ethics-neuroscience relationships?

“Behavior is the mirror in which everyone shows their image.” Goethe