Together with (former) colleagues from the Maastricht STS-group (MUSTS), we created a booklet about instruments and artefacts from the collection of Centre Céramique, a public library and cultural heritage centre in Maastricht. Everyone adopted an object, which varied from forgotten scientific instruments to mundane objects such as a bulb or a key. I chose to write on a  table cigarette lighter.

The instruments had remained in storage for years, but are now displayed at the centre—literally and figuratively, they were “unboxed” by the researchers. The instruments will be on display in groups: every two months, a window case positioned amidst books on science and technology will show a fresh group of instruments until all adopted instruments have had their turn.

The public exhibition display is accompanied by a book in Dutch and English, (published by Verloren, Hilversum, edited by Karin Bijsterveld and with pictures by Eric Bleize), which collects the short essays that MUSTS researchers wrote. In addition, free postcards with QR codes, referring recipients to the artefacts and stories, are distributed.

You can order the book here, or read it freely online here! 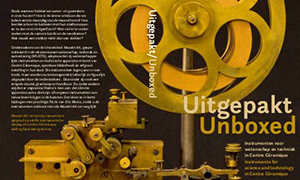 ← Goodbye FASoS, and welcome iArts & University of Amsterdam!
When teaching an art course on de- and postcoloniality of the Dutch East Indies →